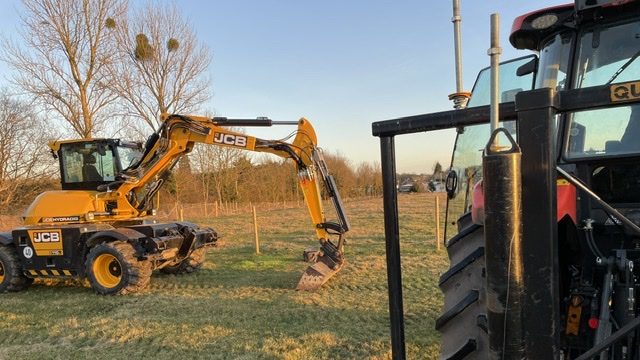 At Burnley FC’s Barnfield Training Ground, the Premier League club’s first order for John Deere machinery from local dealership Balmers GM has bedded in at what is reportedly Britain’s first football facility of its kind.

The 10ha Barnfield site includes 15 pitches altogether, including four full-size Desso and a 60 x 40m goalkeeper area in the first team zone, plus three and a half full-size Fibresand surfaces and two full-size natural soil pitches (topped up with sand over the years) in the Academy areas. The site also includes a full-size outdoor Desso 3G and indoor Desso 60 x 40m 3G. All pitches are split up into sizes appropriate for different age ranges and all feature full drainage, with Rainbird irrigation systems throughout the site.

Head groundsman Barry O’Brien leads a nine-strong team and has witnessed plenty of changes in his 11 years here, the latest his own doing. After lengthy spells specifying other major turf machinery brands, Barry thought it was time to try John Deere. Following extensive trials, he specified the equipment required to cope with exacting conditions both outside and indoors.

The new tractor and mower fleet meets fresh demands that are centred on changing turfcare practices at the ground. For example, gone is the early ‘fluffy’ cut after the team fitted different rollers and adopted a more aggressive maintenance regime of raking out and brushing. “We had a grass factory here, generating far too much growth,” says Barry. “It would challenge any kit, but we’re fine now after adapting the way we do things.”

Balmer’s golf & turf area manager Andrew Meeks, whose family are Clarets fans (although he supports Liverpool!), agrees: “We’ve grown with each other over the years, so it was just a question of responding to Barry’s needs and supplying them, while working closely with the team to deliver the results they wanted.” Barry adds: “In doing that, we’ve developed a trusted relationship that has also helped us to expand our knowledge base.”

John Deere’s all-purpose X950R commercial lawn tractor with rear collection has been proving a deal-maker nationally, and Barry O’Brien’s assessment is no exception. “The machine is very good at sucking up pitch debris across the site as well as leaves off our top pitch, which lies next to National Trust woodland,” he says.

“The X950R is one of the best of its kind anywhere, and fits perfectly into the different approaches our grounds team is taking with football pitches – lighter rolling, clearing out and raking. Also, it stands the grass up so that cutting is more effective and reduces the risk of matting. We’d like another one of them, especially fitted with slick tyres.”

Barry also sees the value of his three 7700A PrecisionCut cylinder mowers in this environment. “They serve the football application just as well as they do golf. Obviously the sports differ, but in many ways they lend themselves to similar machinery applications. The customised grass boxes and nylon rollers are also major benefits.”

With Burnley manager Sean Dyche casting an eagle eye over pitch presentation, the last thing needed is turf machinery making the wrong impression. Used for heavier duty tasks such as hauling sprayers and fertiliser spreaders, the John Deere 4049R compact tractor sports Galaxy turf tyres that fit the bill for the bigger pitches, leaving the manager with little cause for complaint. “He loves the softer tyres – they have a big footprint but leave no imprint on the turf,” says Barry.

Additional 1026R and 2036R compact tractors serve as all-rounders, moving indoors to pull drag brushes and other kit that the team uses to maintain the Desso cross-knit pitch. As Barry adds: “It’s not just about the machinery but what you do with the turf between times that allows you to achieve the best results and benefits. That said, I saw the brilliant back-up we were getting from Balmers and the team’s confidence in the kit, and knew the combination would win through.”